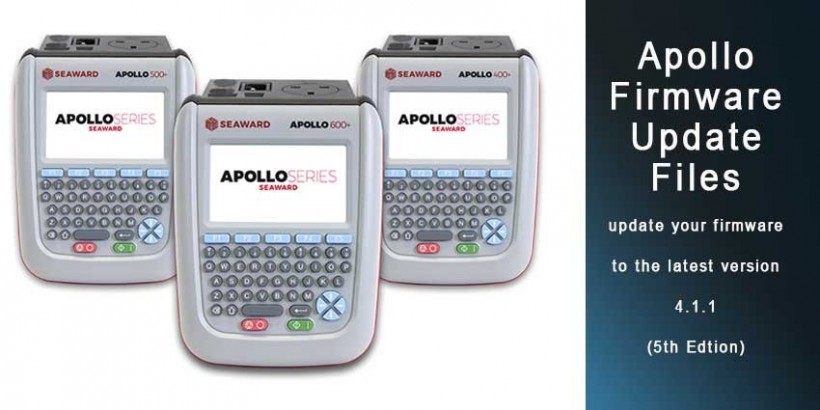 If you're already an Apollo Series user you can update your firmware to the latest version 4.1.1 (5th Edition) where you'll be able to benefit from the new selection of test sequences created in response to the newly release 5th Edition IET code of practice.

Installing this firmware will also allow your existing 4th Ed. Apollo to test up to 5mA for protective conductor current and 3.5mA* touch current. Just choose your firmware from the list below and follow the instructions in the FAQ to update. *5mA for new 5th edition products.

Just choose your firmware from the list below and follow the instructions in the FAQ to update.

Make sure you backup (download) any data on your instrument beforehand. You may want to also clone (download) your settings data (Apollo 500+ and 600+) so that you can upload these afterwards.

How to update the firmware on the Apollo+

Q. What has changed in the 5th Edition?

A. As you would expect, the 5th Edition contains numerous changes to the content and guidance to bring this document up-to-date and make it fit for the equipment and workplaces of the 2020’s.

There are however a few key changes to highlight:


New terminology, the term ‘Equipment’ replaces old terms like portable appliance. This is to clarify that all electrical equipment in places of work requires inspection and testing not just those that are portable, which was a common misconception

A new class of equipment has been added, Class 2 FE (Functional Earth) to cover equipment that has electric shock protection by double or reinforced insulation; but requires a functional earth to operate correctly

Testing changes have been made to the ‘Leakage Tests’ where the PASS/FAIL limits has been increased to 5mA for both Class 1 and Class 2 equipment. An RCD test at 5x the rating for 30mA RCDs is now also required.

Q. When was the 5th Edition released?

A. In September 2020 the IET released an updated set of guidance, the 5th Edition, replacing the 4th Edition document that has been used by the industry since 2012.

Q. Can my older Seaward products be updated to the 5th Edition?

A. Unfortunately, due to the nature of the changes it has not been possible to offer this service to existing PrimeTest users or to those users of Seaward products no longer in production. We have however been able to produce a free firmware update for Apollo Series users.

This firmware will update your Apollo with the new 5th Edition test sequences and also change the protective conductor current test PASS/FAIL limit to 5mA and the touch current test limit to 3.5mA (5mA on new 5th edition products).